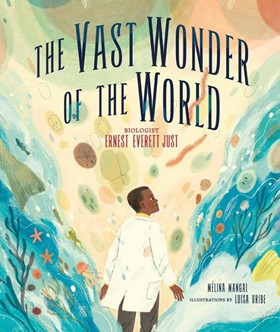 The world under a microscope is truly vast and wondrous, as Ernest Everett Just discovered throughout the course of his work. In this picture book biography, the life of this pioneering African American cytologist is captured in stunning illustrations and engaging text. A scientist with a poetic side, Ernest grew up as an imaginative child with a strong interest in marine biology. He loved to explore the natural world and make discoveries, an inquisitive nature that would continue into his adulthood and eventual career path. The author doesn’t shy away from highlighting the difficulties that Ernest encountered, such as the racial discrimination that led him to eventually leave America. Yet Ernest persisted despite the hardships, making groundbreaking discoveries about the cell, and earning the first Spingarn Medal for his work. Ernest’s story is captivating, the prose flowing smoothly and truly capturing his character. The illustrations depict vivid images of Ernest’s life and also the microscopic world that he explored so closely. The back of the book includes an informative timeline, glossary, quotations, and plenty of additional sources. This book would be an excellent addition to either a life sciences or Black History collection.