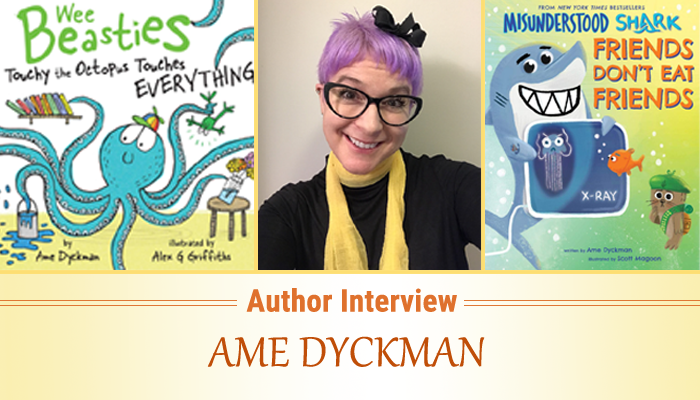 Hi Ame. Three books coming out this spring—WOW! If you were to describe each book with three adjectives, what would those adjectives be?

THANKS, and OOH, FUN game! Okay…

We love that you are so creative with your characters and are wondering what draws you to write about the specific animals you choose?

THANK YOU! I often use animal protagonists because animals can represent EVERYBODY. We’ve all at one time or another been a hungry (or HORRIBLE!) bear, a worried-but-brave bunny, a misbehaving-but-denying-it shark, etc., and I want all readers (especially kids) to be able to see themselves in my characters. But when using human characters, it’s important to represent diversity, so kids can see themselves visually as well as emotionally. I’ve finally written a (not-announced-yet!) human classroom story, and I can’t wait to see all the kiddos!

Read the Book, Lemmings! and Misunderstood Shark have such fun endings. When you begin writing a picture book, do you know what the ending will be?

THANKS, and generally… NOPE! I almost NEVER know the ending of a story when I start writing it. Often, I don’t even start with the BEGINNING of the story! I usually “see” a midway scene or “hear” a bit of character dialogue, and the story grows in both directions from there by questioning—WHAT is happening, WHO is saying it and WHY, etc. (Sometimes my characters completely run the show and I’m just taking dictation! THOSE ARE GREAT WRITING DAYS!)
Misunderstood Shark was unique as we knew it would be the first of at least two Misunderstood Shark books, so I was able to end it on a bit of a “cliff-hanger.” (But my character Bob Jellyfish was mad at me for MONTHS ‘til I finished our sequel (Misunderstood Shark: Friends Don’t Eat Friends) and got him “OUT!” of the… er, PLACE I’d left him!)

You write some of the most humorous books so our readers are wondering what makes you laugh? What’s the funniest joke you have heard?

It’s ridiculous, but the joke that makes me laugh EVERY time:
What do you call cheese that isn’t yours?
NACHO CHEESE!
(Visit me on Taco Tuesday and you’ll hear this joke SEVERAL times! You’ve been warned!)

Several of your books have been translated and are sold all over the world. Can you tell us a little about the process of getting a picture book translated and in the hands of children everywhere?

I’ve been extremely fortunate that ALL of my published picture books have been translated in one-to-multiple languages (Spanish, French, German, Dutch, Hebrew, Chinese, Korean, Japanese, ETC.—even Finnish and Norwegian!) for little readers all over the world. (I treasure each of these translated books—even if I can’t read them! I’m only fluent in English and Five-Year-Old!) Luckily, each of my publisher’s amazing Translation Departments takes care of nearly all my translation work—I usually only chime in when we’re creating other English editions (for sale in the United Kingdom, Australia, etc.) and I’ve used a particularly American English phrase I need to substitute with a more locally-appropriate one. And even then, I have FABULOUS advice from our regional editors.

With so many books written in just a few years, you must never suffer writer’s block. Do you have a writing schedule/routine?

I think EVERYONE gets writer’s block! I wrangle mine by working on several projects at once. If one story stops speaking to me, I just put it aside and work on another ‘til the first one shouts again. And no, I don’t have a writing routine. I write when inspirations (and deadlines!) strike and when I can—while juggling home and family and my new projects pipeline and travel and promotion and one SERIOUSLY attention-demanding cat! But when I am writing, I’m REALLY writing. (Read, “Ame frequently burns dinner when she’s writing!” OOPS!)

If we were to visit and look at your bookshelf, what genre would we find the most represented?


*LAUGHING* Picture books! I own shelves and shelves AND SHELVES of picture books and basically no “grown-up” books. (Unless they’re grown-up books ABOUT picture books! HA!) There’s also a shelf or two of classic MG (Roald Dahl, etc.) and a bit of supernatural/fantasy/contemporary YA for plane trips. But when packing for a car trip, I’ve been known to bring an extra suitcase (or two!) full of picture books!

Visit Ame on Twitter (@AmeDyckman), where she posts book news, goofy poetry, and pretty much everything that pops into her (frequently color-changing) head!