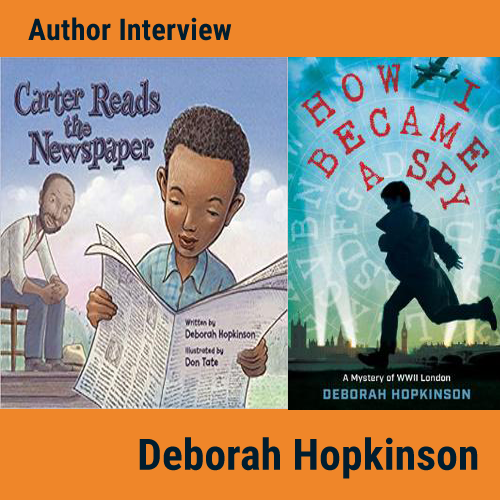 Deborah Hopkinson has written more than 50 books including picture books, middle grade fiction, and nonfiction. She is a sought-after school speaker not only because her works are filled with STEM, STEAM, and CCSS connections, but also because she knows how to bring history to life in her presentations. With two new books coming out in February and gearing up for 2019 school visits, we are delighted that Deborah recently took a few moments with us for an interview.

Your two latest books are here – Carter Reads the Newspaper came out February 1 and How I Became a Spy comes out on February 12.

Can you tell us a little about each one?

I began researching and writing this story many years ago, after a book I wrote was named a Carter G. Woodson honor book. I wanted to know more about Dr. Woodson and while there were longer books about his life, including one by the wonderful Patricia and Fred McKissack, there didn’t seem to be any picture books. In addition to launching what is now Black History Month in 1926, Dr. Woodson founded what is now the Association for the Study of African American Life and History Today we all celebrate Black History Month and I hope this book helps to bring more awareness to Dr. Woodson’s life and legacy.

I guess it’s pretty apparent that I love history, and How I Became a Spy: A Mystery of World War II London is a mystery about codes, ciphers, and spies set in 1944 London in the months leading up to the D-Day invasion of Normandy on June 6. This year will be the seventy-fifth anniversary of that historic event. I like to play with settings and genres with my middle grade novels.A Bandit’s Tale set in NYC, is a picaresque novel about immigrants and social reform; The Great Trouble also set in London, is Dickensian. For Spy, I wanted to try my hand at a thriller (without car chases!). The book includes actual deciphering practice messages for readers to do on their own (and yes, the answers are in the back).

Which comes first in your historical fiction writing- the time period or the character?

For longer historical fiction such as How I Became a Spy or The Great Trouble, both set in London, the setting or a historical event comes first. For instance, The Great Trouble is based on the 1854 cholera epidemic and the efforts of public health advocate Dr. John Snow to prove that cholera was a water-borne disease.

I’ve written several nonfiction books about World War II, including a title about the Danish resistance and rescue of the Danish Jews Courage & Defiance. That’s when I first learned about the work of the Special Operations Executive (SOE). As I began reading about women SOE agents, I wanted to write about their incredible courage in parachuting into occupied Europe. I set How I Became a Spy in 1944 London, in the months leading up to the June 6 invasion of Normandy, commonly known as D-Day. The protagonist, Bertie, is an air raid shelter volunteer, and his friend Eleanor is an American whose father is helping with the war effort. They team up when her French tutor, Violette, an SOE agent, disappears, leaving a coded notebook behind.

As I tell students, though I don’t usually put people I know into my books, I do put my dogs. Piccadilly in Trouble was based on a wonderful dog we once had, and Little Roo in Spy was inspired by my Cocker Spaniel, Rue (who’s named after Rue in The Hunger Games.) 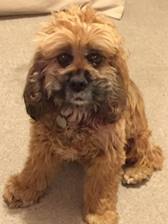 (This is Deborah’s Cocker Spaniel, Rue, who inspired Little Roo in How I Became a Spy.)

How do you decide if the book you write will be historical fiction or nonfiction?

For picture books about real people, such as Carter Reads the Newspaper, I almost always try to write it as nonfiction first. I have sometimes turned the book into historical fiction if the story just isn’t working well as a nonfiction text.
A Boy Called Dickens is one example.

In the case of Dr. Carter G. Woodson, we were able to use some original quotes and shape a nonfiction biography around the role that newspapers played in his life. I always include an author’s note to help young readers, parents, and educators continue their exploration.

For longer works, I prepare a proposal for either nonfiction or historical fiction based on preliminary research. I do like to double dip with my research. In 2018 I published a nonfiction work, D-Day: The World War II Invasion that Changed History (Scholastic Focus). I was able to use some of what I learned as background for How I Became a Spy, although I also did further research on life in wartime London and the Little Blitz of 1944. (Readers will meet Dwight D. Eisenhower’s dog Telek in both books!)

In 2020, I’ll publish a nonfiction title, Refugees and Survivors: Escaping the Nazis on the Kindertransport, also with Scholastic Focus. For that book, I have interviewed several Kindertransport survivors still living in England, and my research helped inform the character of David in Spy.

Which of your books took the longest to research?

I’d have to say D-Day: The World War II Invasion that Changed History took the longest and was the most challenging book I’ve ever written, in part because the military operation and the planning behind it was so massive. It’s the sort of topic where you realize you could spend a lifetime researching it and still feel like a novice.

What are the best/most helpful resources you have used for your research?

I love research. It’s especially helpful to visit a location in person, but that’s not always possible. I do rely heavily on museum and library archives, oral histories, interviews, and academic works. I love to mine bibliographies. Carter G. Woodson didn’t write an autobiography, so for Carter Reads the Newspaper, I first read biographies, then followed references to find articles and essays he wrote for a journal, The Negro History Bulletin. In one, he talks about Civil War veterans, including his father and Oliver Jones, men who had a profound influence on him. Those stories were helpful in writing the book, and of course, Don Tate did an amazing job in bringing Dr. Woodson’s story to life.

How did you manage to write over 50 books, which were mostly written while you were working full-time? Part-time writers would love to hear your tips.

Working at a full or part-time job and raising a family definitely make it harder to write. Most of my early books are picture books; I also started out writing (and eventually selling) stories for magazines. I often tell part-time writers to just do the best they can and put their energies in the direction in which they want to go. I don’t think it’s helpful to set unrealistic goals or to feel guilty if life gets in the way of writing. Just don’t give up. I didn’t become a full-time author until 2014 – more than twenty years after my first book was published.

If we were to visit and look at your bookshelf, what genre would we find the most represented?

Well, there are my bookshelves, crammed with favorite picture books and nonfiction resource books. In addition, I use what I call the “bin method.” I have several bins of research books around my desk (which is actually a large dining room table). Each bin is a different project (and often I have multiple bins for one book). I tend to keep resource books for several years, just in case questions arise. Right now, I have three large bins of nonfiction books on World War II. As far as reading for pleasure (I love mysteries and historical fiction) I download library books on my Kindle and I also love to listen to audiobooks, especially when traveling around the country for school visits.

What are you working on next?

I’m finishing several picture books and working on a final World War II nonfiction title, this one on rescuers and resistance during the Holocaust.