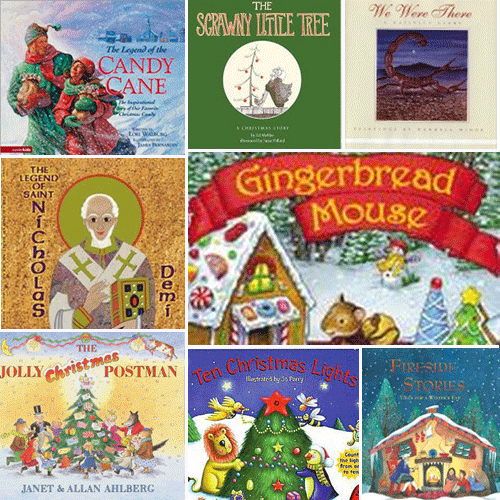 Eleven years ago, my family and I experienced a rather warm Christmas day in Virginia. The temperature was 65+ degrees with lots of warm sunshine. Weather like this was perfect for grilling and eating outdoors which is exactly what we did. Thus began our fajitas for Christmas lunch tradition and we have continued it ever since, even on the colder Christmases.

Christmas Cards- In Britain, one was expected to write letters to family and friends at Christmas time. It was a time-consuming effort and realizing so children’s book publisher Henry Cole asked an artist to create a card with his picture and a statement of Merry Christmas and Happy New Year. Cole then reprinted the card and sent it instead of the Christmas letter. To read Christmas cards from the Big Bad Wolf and all the King’s Men, read The Jolly Christmas Postman by Janet Ahlberg.

Christmas Tree- The Christmas tree is a German tradition that took place during the mid-winter festivals. In autumn once the leaves had fallen, people thought the good spirits had left. To persuade the good spirits to return, people would cover the trees with colorful pebbles and cloths. They assumed this worked when they saw the leaves return in the spring. Oak trees were originally used but the chosen tree was later changed to a pine tree and brought inside the home to decorate. Queen Victoria is most known for spreading the tradition to other countries when her German husband, Prince Albert, brought the tradition to the palace. For a sweet book about loving a Christmas tree, take a look at The Scrawny Little Tree : a Christmas Story by Ed Mehler.

Christmas Lights- One night, Martin Luther admired the stars sparkling through treetops. He decided to recreate this for his church by burning candles on his church’s Christmas tree. A safer light show to share with your children is Ten Christmas Lights by Teresa Imperato, complete with push button lights.

Candy Canes- A German choir director gave sugar treats in the shape of a shepherd staff, which he called candy canes, to children during a Nativity service. The red stripes and peppermint flavor were added later, as were their use as Christmas tree decorations. Author Lori Walburg chooses to create a different legend about the candy cane in her book The Legend of the Candy Cane, along with additional background about the candy.

Nativity- While the Bible does not state the date of Jesus’ birth, many Christians choose to celebrate his birth on December 25. Why this date? Some believe it was to allow Christians a ‘non-pagan celebration’ during winter solstice. While most children recognize the usual horses, cows, and sheep in the Nativity story, author Eve Bunting chooses to let the smaller animals tell what they witnessed in We Were There: a Nativity story.

Yule Log- In Scandinavian countries, during the winter months when there was no sun for days on end, a celebration was held to welcome the sun when the first ray was spotted in the spring. A large fire was built, featuring a yule log to celebrate. The celebration became known as Yuletide. For some people a yule log is a rolled cake decorated in chocolate frosting to look like a wooden log. Some wintry stories to read by the fire can be found in Fireside Stories: tales for a winter’s eve by Caitlin Matthews.

Santa Claus- After his wealthy parents died, St. Nicholas, a Turkish bishop, used his inheritance to give gifts to the needy. One of the stories of Nicholas’ giving includes how he helped three sisters whose poor father could not afford their dowries. Supposedly, Nicholas secretly left a bag of gold through one of the broken windows. It was enough money for the first daughter to marry. He did the same the next night. By the third night, the window was repaired so he had to drop the gold down the chimney where it fell into stockings that had been left to dry by the fire. To learn more about St. Nicholas, The Legend of Saint Nicholas by Demi recounts pivotal events in the history and life of Saint Nicholas, including how he came to be associated with Christmas and Santa Claus.

From the CLCD family to yours, we wish you a Merry Christmas and a healthy New Year!