Featured Article: The Dog That Changed My Mind 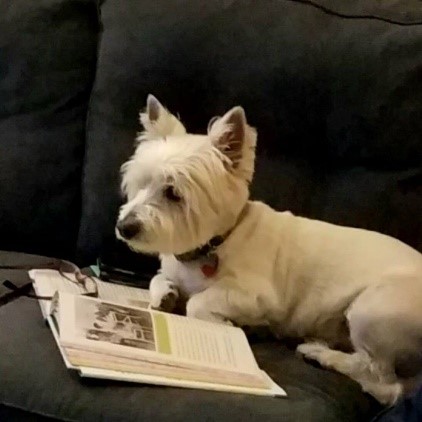 On February 16th many in the world celebrated Chinese New Year, thus beginning the Year of the Dog. The Chinese regard the dog as a lucky animal and one who brings good fortune. In general, dogs are known for their loyalty and ask nothing in return but love and affection.

I never understood the concept of the loyal dog, full of love and affection because from the age of 3 to 35 dogs equaled terror for me. You see, when I was about three years old, my grandmother cautiously warned me to stay away from a dog, saying that the dog would hurt me. Somehow this comment stayed in my little brain and became truth for me most of my life. Although my parents randomly had outside dogs, I never interacted with them for fear they would harm me. I would run any time I was confronted by a dog.

Fast forward to Thanksgiving weekend of 2008. Over the years our daughter had repeatedly asked for a pet, specifically a dog. We had tried fish, who lasted one year, and two bunnies which lasted a little less time. (The bunnies didn’t die like the fish, we just decided they needed a new home.) But deep down inside our daughter still wanted a dog. Of course, it was non-negotiable for this dog-fearing mother. But then the stakes got higher- our daughter said please let her have a sibling or a dog. Let’s just say we visited the pet store.

Bolt has been a part of our family now for over nine years. He is loyal, never asks what’s for dinner or for money, nor complains. He only wants affection, a stuffed animal that he can destroy and exhibits unconditional love. He is perfect for hugging after a long day and is so adorable that one can’t help but smile and talk baby-talk to him.  For me, he has taken away my fear of dogs. Well, the smaller less jumpy ones at least. So, I guess for me he is a lucky animal and brought me the good fortune of understanding how wonderful a dog, and animals, can be.

It’s no wonder then that dogs are prevalent characters in children’s books. They provide a safe and comforting character for many children, especially when placed in a story with heavy issues such as loneliness, fear, and abandonment. There are very few children’s books that portray dogs as vicious; instead their roles in a story are that of strength, loyalty, and understanding. In Alexandra Day’s Good Dog Carl books, Carl is gentle and trusting. John Erickson’s Hank the Cowdog is loyal to his family, the ranch and brave when he needs to be. Phyllis Reynolds Naylor’s Shiloh, even though mistreated by a human, is still able to bond with a boy and be the boy’s confidant.

Groucho Marx is quoted as saying “Outside of a dog, a book is man’s best friend. Inside of a dog, it’s too dark to read.” But behold the power of a book about a good dog.