Who is the author of Nancy Drew? 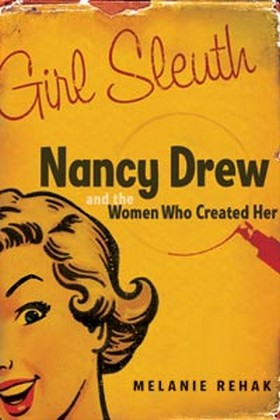 Last week while working on a weeding project in the nonfiction section, I stumbled upon the book Girl Sleuth: Nancy Drew and the women who created her by Melanie Rehak. This book’s premise is how the Nancy Drew series came to be and the two most influential authors of the series. I had known that Carolyn Keene was the pseudonym for the two authors of the series but I had no idea the full, fascinating history of Nancy Drew.

As Rehak and other online sources confirm, Nancy Drew was the creation of Edward Stratemeyer and sold to publishers through his Stratemeyer Syndicate business. Stratemeyer began his career as a writer, and with a head full of too many ideas to write by himself, created a company in which he created story titles, characters, and outlines and then hired freelance writers to turn the ideas into full-fledged books. The endeavor was very prosperous for Stratemeyer and the Stratemeyer Syndicate churned out many fifty-cent dime store juvenile novel series for both boys and girls in the early 1900s. After the success of a detective series about two brothers, the Hardy Boys, Stratemeyer set his sights on creating a detective series with a female lead character. The idea for Nancy Drew was born.

To write the Nancy Drew series, Stratemeyer offered the opportunity to Mildred Augustine Wirt Benson, the ghostwriter of Stratemeyer’s Ruth Fielding series. Benson developed Nancy into an independent, strong, resourceful, and optimistic character. Instantly, Nancy Drew became a hit and was admired by young readers. Benson wrote 23 of the first 30 Nancy Drew novels. She stopped writing the series when her pay was reduced after Stratemeyer’s daughters took over the company (after Stratemeyer’s death) but returned later for a few more.

Some sources claim up to eight different writers contributed to the Nancy Drew series. If so, who was the other influential Nancy Drew author? Rehak suggests it was Harriet Stratemeyer Adams, one of Edward Stratemeyer’s daughters who took over the company. Harriet and her sister Edna both continued to create plots and outlines for the Stratemeyer Syndicate, just as their father had, and followed the same business model of hiring ghostwriters. While the company had many series simultaneously being published, the Nancy Drew series was by far the biggest money maker. As decades changed, Harriet proved pivotal in keeping the character Nancy Drew up-to-date and in many ways true to the original characteristics of Nancy, though all readers would not agree.

The Stratemeyer Syndicate was often criticized by other writers and publications for producing mass-produced, just-to-sell stories. As a librarian, I see these types of novels as something different. I see them as a way to hook a reluctant reader and love to see the enthusiasm that a child expresses when she is telling about what she has read. Regardless of how you feel about true authorship in the Nancy Drew series, or the other series produced by Stratemeyer, I have witnessed countless children follow their favorite detective characters through many novels as I am sure many of you have also. When interviewing children about why they like these types of novels, you receive answers such as “I like that she got the bad guys,” “I guessed who do it before Nancy did,” or “I want to be a detective when I grow up just like Nancy.” I have a feeling that their parents are reading Stephanie Plum and Kinsey Millhone. So, thank you, Nancy Drew.

1 thought on “Who is the author of Nancy Drew?”